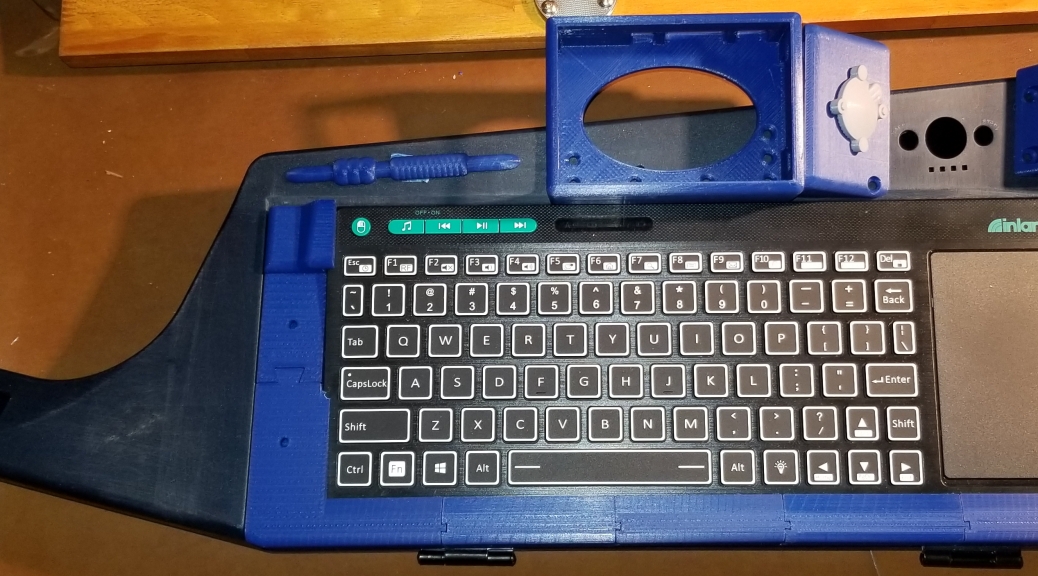 Okay, so it’s been a while since I had made some progress on my keytar cyberdeck build, mostly because my 3D printer had broken down and I had to send it in for replacement.  As seen in last week’s post, I have the printer back and I was testing it out with some other prints that I’d been wanting to do.

This week I’ve printed the remaining components for the tray mount, most of which had been waiting on the SD card already.  Except that bottom middle piece…. I had to shave 2.53 millimeters off of the model, re-export, re-slice, and re-print it.  Oh well, more experience in modifying parts in Fusion 360.  I’ve been learning a lot about that program while using it… including that it sucks when they run an update to change the interface at inopportune times!

To make sure the finish quality was as good as possible I printed these parts at the same settings I used for printing miniatures.  Takes longer, but it was higher density, thinner layers, etc.

Now I’ve got to figure out how I want to measure where to drill the holes, then continue the litany of things to do (order more stickers, redesign the power system, prime, sand,  sticker, clear coat, matte coat, assemble).

By the way, if anyone happens to be interested in looking at the models, I’ve posted them on thingiverse here with a really lengthy name:
https://www.thingiverse.com/thing:3880609

I should note that these files would need tweaking if anybody else were to print these.  The tolerances make the connecting bits fit loosely.  They’re more like guidelines to help get the parts where they need to be, but not a solid fit.  By the time I realized it I was very much not interested in going through every connection point and adjusting.  I’ll add that to my mental lessons learned folder: design test fit parts for the connections before going into full production mode.  Just make the connection you are trying to test and a bit of material to be able to handle it for testing.