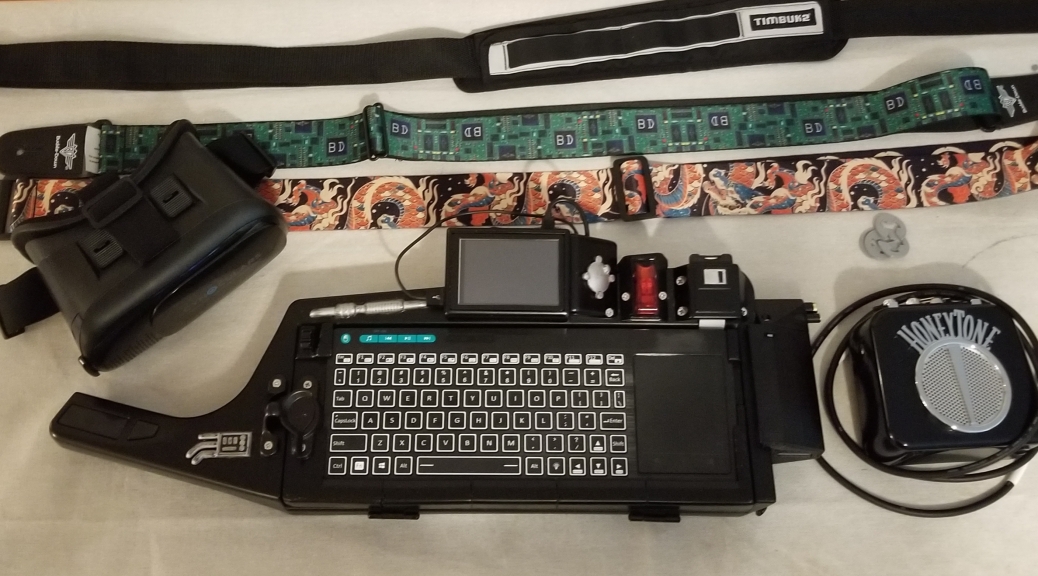 Let’s start with the premise:

While viewing and reading about Cyberpunk 2077 when a trailer came out in 2019, someone mentioned the concept of “rockers” as a class in the pen and paper RPG.

I’m a fan of deckers in cyberpunk fiction, and I got the idea of playing a decker in an RPG who hides in plain sight as a musician, his cyberdeck disguised as the most 80s of instruments, a keytar. When exfiltrating from a mid-city run, he blends into a crowd with his “instrument” as part of his disguise, perhaps even getting so cocky as to set up on an empty street corner to hide in plain sight while key-syncing to prerecorded music.

Then I realized I could probably build one. Functional as a portable computer, anyway; I’m not gonna be conducting illicit activities.

I do like my electronics, and I have a 3D printer and modelling software for custom components, so, why the hell not?

I knew I’d start with a Raspberry Pi as the computer in it, and searched to find an appropriate keytar to gut and convert into a cyberdeck. Eventually I found a Rock Band 3 keytar controller at a thrift store, which seemed the perfect portable size.

After about a year of 3D modelling, 3D printing, sanding, painting, soldering, modifying the case, etc, I think I can finally say I’ve gotten it to a “completed” state. At least until I decide to continue work on some of the add-ons and code again. Here she is:

Let’s take a quick tour around the πTar.  First off, if it’s a pewter-colored piece that isn’t immediately identifiable, it’s just a greeblie of some sort. The pi and the screen are located in that box at the top of the deck, with the power switch and SD card reader to the right of it. The angled piece next to the box is the wiring interface, allowing the wires to pass into the case in a slightly more protected fashion.

On the far right end is a general interface dock. It includes a USB 3.0 hub, SD card reader, micro-SD card reader, and audio jacks in two different sizes. The larger audio jack is for use with a belt-amp that I use as the speaker (because KEYTAR and it’s the 80s, right?). The nub in the lower left of the image is one of the connectors for the shoulder strap.

Taking up the majority of the real-estate on the πTar is a keyboard, situated where the original piano keyboard used to be. It’s a wireless keyboard that is backlit in different color options.

The keyboard is slotted into a tray that folds out. I have to be able to plug the wireless keyboard in for charging, and I liked the idea of pulling it out to do so. There is a window latch on the far left end to hold the tray shut when needed. The window latch always seems to surprise people.

The fold out tray also allows access to some of the guts of the πTar. And, you know, show it’s mine, what with the big honking logo on the backside of the tray.

The system runs off of a power bank and some custom cabling to allow for all the electronics to work. I ended up having to manually modify some of the power wires to work with the switches and distances I wanted. The interior also acts as storage for some accessories as needed, such as some backup SD cards, flash drive, stylus, and a charging cable for the power bank.

Here’s the back of the deck, stickered in rebellious fashion, partly in imitation of a lot of instrument cases I remember seeing in high school. I figured I could work some of my fandoms into this, mostly with a rebellious theme. Can you identify all the references?

Right now it doesn’t do much more than exist as an odd raspberry pi casemod, but it is portable and connects to WiFi. Also, to fit with the theme, I have a belt amp that plugs into it for me to play MP3s out of it, so I guess it’s a really inefficient MP3 player, but it also fits the original concept.

Eventually I intend to build more of a costume to go with this, but for now I’m pretty proud of what I’ve come up with. Keytar theme aside, I think this is a form factor that would work pretty well for a Gibsonian cyberdeck. Easy to carry and has plenty of connection points.

Finding/creating a collection of programs to store locally to roleplay hacking.

Connector cable “squid” for a variety of connectors.

You can find the related blog posts logging my progress here:

My STLs are posted on Thingiverse, here:

Warning: I am not sure if all these files are up-to-date and fit. If you use these files you may find that they don’t fit precisely. I know the connectors between pieces are loose, but there was also a bit where I was iterating quickly and didn’t document well.  At some point I want to go back and make sure all the files are correct, but that is a tedious task I do not have time for at the moment.

The deckers over at the Cyberdeck Discord associated with the following website have been extremely helpful and supportive over the latter half of this build.