Whenever I would ask for help trying to get the wifi capabilities of my Monoprice Select Mini Pro working as they were originally advertised (specifically, where to get the firmware to reflash the printer’s wifi software), it seems like everyone just shouts “OCTOPRINT” at me instead of answering my question.

So, screw it, I’m trying Octoprint since I couldn’t get an answer to my original questions.  I’ve heard wonderful things about it, and it should hopefully give me most if not all the functionality I’d want long term, but it would have been nice to have been given an answer to the question that was asked.

I’m using a Raspberry Pi 4 to run Octoprint since the printer runs in a different room from my PC.  The image I started from is the OctoPi image, where someone made a disk image specifically for setting up Octoprint on a Raspberry Pi.  The initial image can be found here:

So far it’s working pretty well, though I need to doublecheck and update my logbook to make sure everything is recorded.  Sadly, there was a gap in my process (prepping for a convention), so I’ve probably missed some important documentation.  There are a few things to note when installing one of these.

Now that I’ve at least got it running to a certain degree, here are my thoughts about Octoprint.

I like that I now have a telemetry feed, allowing me to monitor temperatures.  I got the impression there were big temperature fluctuations at one point, but now I can check the graph.  It has a default image in the background, but I was able to load my own custom one. 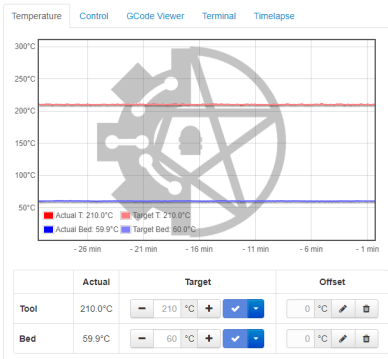 I’m really enjoying increased functionality.  I no longer have to keep loading and slotting an SD card between my desktop and the printer in the other room.  I can just send files over, and tell it to print.  Much less of a hassle that way.

One of the plugins that I added is an e-stop.  I haven’t tested it, and it’s awkwardly located on the control page (right next to the settings menu), but at least it exists.

If I want to check whether the printer is ready and/or monitor it’s progress visually I currently still have to open VLC, but it’s at least there.  It just isn’t an all-in-one app setup at the moment.

Octoprint is an amazing tool, which gives me more information, more control, and saves me the hassle of moving files around manually.

Buuuut… it still needs some work.  Not supporting RTSP natively is really frustrating, as I was already using this camera specifically for monitoring 3D prints, but the app won’t let me view the feed directly.  There are multiple threads dedicated to people trying to figure this out, and following the directions people claim to have success with doesn’t appear to be working for me yet.

My printer is ALIVE again!  While I was performing maintenance, I discovered that the y-axis linear bearings were giving out.  That’s part of why everything was somewhat on hold with Octoprint, as I couldn’t really test it too well with a broken bearing.  I ordered parts, then discovered when I went to install them that I did not have the tools or expertise to swap them out easily.  I had thought that the bracket would come apart with screws.  Instead I found this:

Turns out these were press fit, so I ended up taking it to a machinist to swap them out.  He was able to remove the old bearings and insert the new ones in less than 10 minutes, and for much cheaper than if I had tried to get an arbor press to do it myself!  I’m definitely going to keep this shop in mind for future repairs and possibly for getting some custom parts made.

This is kinda here as much for my reference as yours, so I can find these things again if I need to.

Here are the settings I used for setting up the printer’s config:
Monoprice Select Mini Settings for Octoprint

This page was helpful for trying to figure out a PIP not found issue with octoprint on my setup:

[Tech] ELI5: How to solve "pip command not found" in octoprint from 3Dprinting

I’ve attempted these instructions to try to get my Wyze 2 webcam to work on here, but so far it’s not working for me.  I think I lack the fluency to see what’s going wrong yet.