I was wandering around a used book store recently, and came across one of these in the “rare” section, and was hit with a wave of nostalgia.  One of these kits was my first exposure to the game of Dungeons and Dragons, and it quickly caught my interest.  One of the guys in a kids group weekend outing had brought his copy along, and was teaching the other guys how to play.  I was forbidden by my parents to play (due to the backlash against D&D that was still somewhat present), so I just watched.  I was drawn in by the adventure and heroes, and still have some specific memories of it.

These sets were created to introduce people to very low levels of the 3rd edition game that was recently out.  You could start with this box, but if you wanted to play higher levels you needed to go get the rulebooks.  Seems like a pretty good hook to me, one I’ve seen used in various ways in other editions.  4e had it’s Red Box, 5e had it’s starter set (and now the Stranger Things Redbox, which I need to unbox here sometime).

Anyway, coming to the store reminded me of it.  I looked at their copy, found it was missing some pieces, and decided to hold off and look online.  Sure enough, I found a COMPLETE copy online, with the tokens unpunched.  A few days later, and my copy has arrived.

It’s a pretty large (if shallow) box.  Not too heavy, either.  To be expected, it’s only supposed to be paper products and a set of dice. 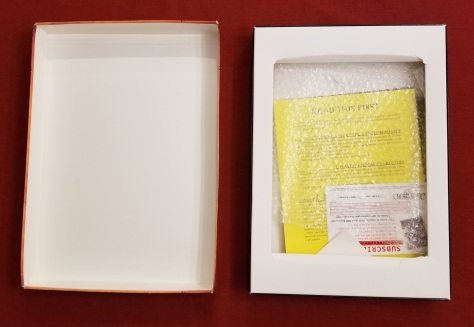 Heh. The bubble wrap is mostly pointless, but I guess it keeps the paper from moving too much.  The box is a bit dinged up, but good enough!  Can’t expect a perfect box 19 years after publication and probably at least a decade out of production.

Contents of the Box

As advertised, this thing had EVERYTHING still in the box.   Especially important to me, all the tokens are there! 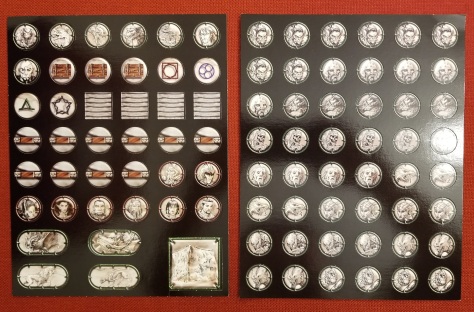 One had popped out of the sheet, but was still in the box.  The tokens were just as I remembered them.  Pictures of all the adventurers and creatures on one side, with their names on the reverse.  The noncreature stuff has two states for a lot of items, which is really useful.  For example, the door tokens showed you there was a closed door in the wall, and flipping them over showed when a door was open.  This was particularly important, as the way the game map is drawn there are no doors on the walls!  This allows you to use the same map different ways, and also to not spoil the layout early.  By the way, here’s the token I remembered most.  The GELATINOUS CUBE!

In Dungeons and Dragons, Jello eats YOU!

I remember the party fighting this, and was impressed with this monster.  I love how the artwork even shows the last guy to tangle with it, still being digested.  As mentioned before, here’s the map.

It’s got a bunch of numbered rooms on the map, but no doors!  I seem to recall this having been used with the walk down the hallway described, and then a portion of the map used as described by the book to play detailed encounters.  I’m pretty sure the gelatinous cube was somewhere in either room 19, 20, or 26.  The map’s backside is a simple grid.

It’s blank grid could be used for drawing your own dungeons.  I personally won’t be using that side, I don’t want to mess it up, and I have a perfectly good Chessex mat for that.

Next is the general game documentation.

This page introduces the general premise of the game for people completely unfamiliar with it. 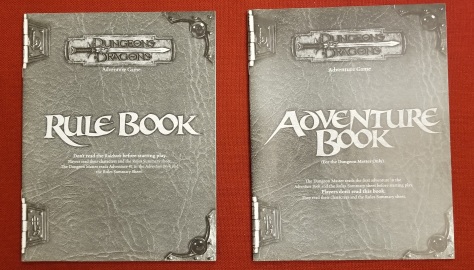 The box came with a Rule Book for everyone to learn the game, and an Adventure Book to provide the first adventures for the DM to run without having to prepare anything.  I haven’t had time to read through these yet, but I hope to introduce some of my 5E adventuring companions to this edition with this at some point.

Now that we have the rules, we need some characters to play with.  Do we have to learn how to build characters in this set.  No!  We don’t want to get people to play, not get bogged down with character building rules to start.

Some of you who’ve played 3.0 or 3.5 may recognize several of these characters, thoughtfully provided to start the game quickly.  These were the example characters mentioned in at least the 3.5 rulebooks as exemplars of their classes.  There are 6 main characters, and 2 optional ones that are buried in the paperwork for the others.  There is also a rules summary cheat sheet to aid quick play.  I was as impressed this time as I was back then with these bright, descriptive character sheets, with a helpful dice guide for new adventurers.

And no adventure is complete without: 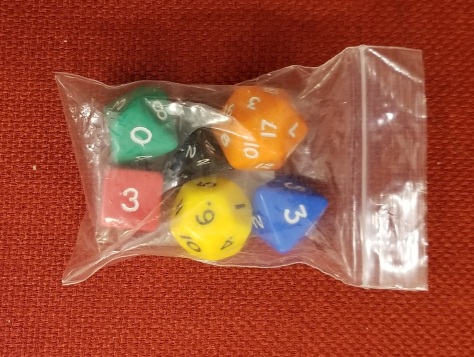 Dice!  Gotta have some dice to play the game.  By the standards of many players I know, these would probably be a tacky collection to have.  Why not have a matching set?  Well, if you look back at the character sheets, these are color-coded.  They are all different colors, because as we’ve all seen with new players, people get confused trying to find the correct die for a while when they first start playing.  The sheet will tell you which die you need, and you don’t have to count sides, as the color is the easiest way to identify them.

I hope you’ve enjoyed this.  I know I’ve certainly enjoyed taking a trip down memory lane, and I hope to actually get to play this set after almost 20 years since I’ve first seen it.