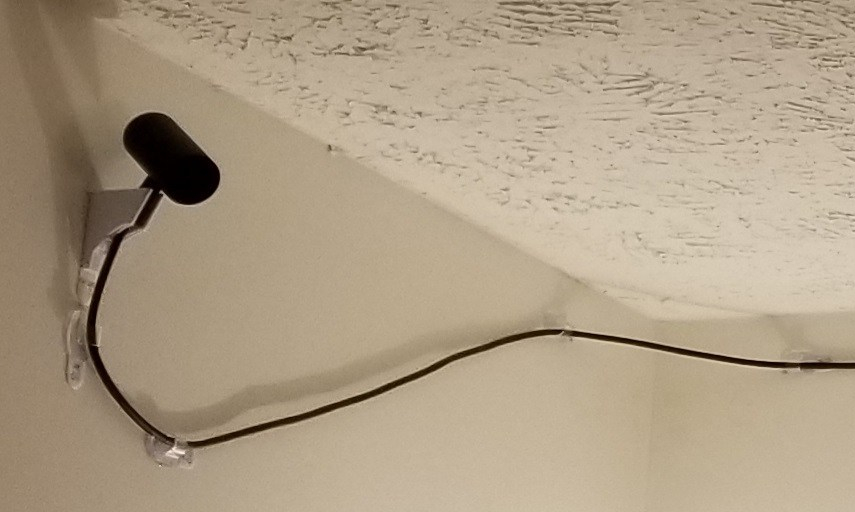 The hooks appear to be working pretty well, though only time will tell whether they support the weight properly long-term.  I decided not to rearrange the sensors due to the hassle involved, and just repointing them a little in their existing mounts seems to be enough to get better coverage.

And the process of just redoing the wires was enough of a pain to begin with.

Also, You have to be careful with corners and long stretches. 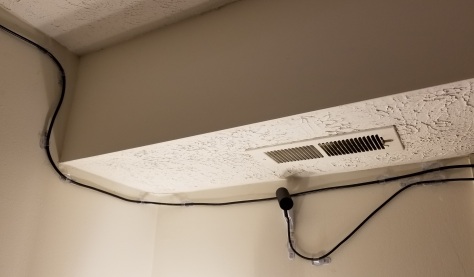 You probably can’t tell in the upper left, but when I was making the 90 degree turns in plane, you might have to be careful with which way you make the hooks face based on the direction you expect tension in the wires.

Also, at the sensor itself, having those additional couple of hooks is kinda crucial, to take torque off of the wire as it leads into the sensors so that it doesn’t rotate or get pulled out of the mount after you’ve set it.

Anyway, it took a while, but it’s (mostly) done.  There is a stretch of wire that sags a bit because you are supposed to put a hook every 2 feet, but that section of wall is completely taken up by a window, and the frame is not a flat surface (the hooks need a flat surface to adhere to).  I’m debating adding some additional hooks at an angle on the opposite side to kinda provide some friction to hold the wire up a little better.

There is a bit of annoyance at the end of the setup.  I clicked on the “would you like to set up 360 tracking” popup after plugging all of the sensors back in, and it ran through the entire setup process… which includes the unskippable tutorial sequence with the small robot.  Thankfully, it’s a well-made sequence, so it’s not too bad having to go through it again.

In any case, I am DONE with this for a while, and it looks much nicer than the masking tape and the painter’s tape before it.  It should hold better, too.  Command strips are like magic for hanging stuff on my walls without damaging them.  One could even say… technomagic…