For those of you who like lawful characters in RPGs, here are some of my favorite lists of rules from fiction.

These are a set of rules created for the webcomic Schlock Mercenary.  Originally the were the Seven Habits of Highly Effective Pirates early on in the webcomic… but the writer was served a cease and desist order, so he had to change the name of the list.  However, this is the one time I’ve heard of one of these orders being GOOD for creativity, as he changed it to the Seventy Maxims of Maximally Effective Mercenary.  The much larger number allowed him to keep making up rules for the mercenaries to quote in the series as he came up with them.  I liked them so much that I’ve got a hardcopy of them.

Maxim 2:  A Sergeant in motion outranks a Lieutenant who doesn’t know what’s going on.

Maxim 3:  An ordnance technician at a dead run outranks everybody.

Maxim 34:  If you’re leaving scorch-marks, you need a bigger gun.

These were written for the show Star Trek: Deep Space Nine to add depth to the Ferengi race.  They are a collection of rules governing the corrupt, cutthroat world of Ferengi commerce.  I wouldn’t recommend actually living by these rules, but they are highly amusing, and a few are pretty good.  I’ve got a copy of this set of rules too, but they were never completed on the show, and thus the book that contains them is also incomplete, and billed as being “Quark’s favorite selection” of the rules.  The one I have is written by Ira Steven Behr, one of the writers and producers who came up with them in the first place.  There is another book purporting to be the complete rules, but as far as I can tell they are out of print, hugely expensive, and the author does not appear to be connected to the show whatsoever.

48.  The bigger the smile, the sharper the knife.

76.  Every once in a while, declare peace.  It confuses the hell out of your enemies. 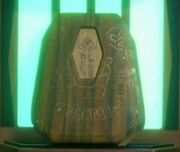 These are the rules of Leroy Jethro Gibbs from the television series NCIS.  Mostly related to investigations in NCIS, but several are good for life in general.

Rule 23:  Never mess with a Marine’s coffee if you want to live.