Knowing where to find information quickly on you character sheet is vitally important.  I highly recommend taking a bit of time getting familiar with where things are located on character sheets, so no matter which character you play you can quickly get to slaying goblins rather than get lost on the way to your combat stats.  I was originally going to include this as a portion of D&D AL Tips Part 3, but it was making the whole post too long.  That post will include a link back to this one for reference.

Here’s the character sheet as a whole, so you can find your way around my cropping in the later sections.

Note:  Particularly with Adventurers League the top of the page will change visually from sheet to sheet as the seasons progress, but the location of the information should remain the same.

Location: Top of the page

This section gives the basic identity of your character; name, class, level, background, race, and alignment.  The information people usually want to know when you introduce the character.  It also includes a space for player name and a spot for tracking your experience points (note: in AL you mostly keep track of your experience on your logsheet).

This is where the 6 basic stats are kept.  If the dungeonmaster calls for an ability check, this is where you look.

Location: Upper left, just to the right of the ability scores.

You can mark whether or not you have an inspiration use given from the DM.  You can only have one at a time.  The proficiency bonus is a stat that slowly changes as you level, and factors into everything you have proficiency with (specific saving throws, skill checks, attacks, and spellcasting).  If you’ve kept your sheet up to date as you level, you won’t normally have to reference it at the table.

Location:  Left side, just to the right of the ability scores and below the proficiency bonus

Anytime a trap gets triggered, and often when a spell is cast on you, you’ll have to look here for your saving throws.  I hope you roll well, because if the DM is calling for one of these, a failure usually means more pain for your character… or the party at large if something is trying to control you.

Location:  Left side, below the saving throws

These are going to get referenced a lot.  Anytime you do that has a chance of failure, other than an attack, will use one of these scores.  Note that at the bottom there is a specific blank for your passive perception.  The DM will often ask for this at the beginning of the session, so they’ll know whether you notice things if your character isn’t specifically looking around at a given time.

Location: Center of the page 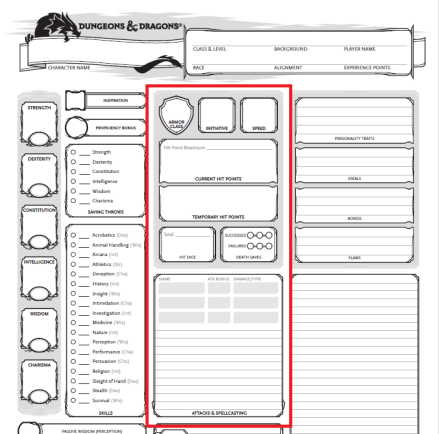 This section is in the center of your character sheet for a reason, as you are going to use it a lot.  A lot of players seem to get lost trying to find information in this section, so I’ll probably do another mini article on it at some point.  Generally, though if it’s combat related , it’s in the center.

Your attacks are in the box at the center of the page.

Other Proficiencies and Languages

If the DM asks if your character knows certain languages, or is proficient in various armors, weapons, tools, or vehicles, it will be listed here.

These are here mostly for roleplaying purposes.  They have no direct mechanical effect on gameplay or rolls (at least in Adventurers League), but DMs sometimes hand out inspiration if you do things that particularly adhere to these traits.  This is here so your characters have more life and personality at the table, instead of being cardboard cutouts with stats.

Note:  If you play at a non-AL table, DMs may factor these into the gameplay more, and start wrapping parts of the story elements around the various characters’ character traits.  I’ve known some to use the flaws section against you… which can be highly entertaining if done well. 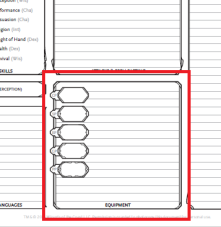 At least when you first make your character, all equipment you are carrying should be listed here.  I highly recommend getting or making a separate inventory sheet.

This is where all of your class abilities should be listed.  I highly recommend listing the book’s abbreviation and page number for each one, as a lot of them are too wordy to write out here.

One thought on “Get To Know Your Character Sheet: Overview”